Giovanna Bellia La Marca was born in Ragusa, Sicily. She came to the United States at the age of 10, and has kept her love for Sicily alive with frequent trips to the island. Now a retired art and Italian teacher, she devotes herself to writing, cooking, entertaining, traveling with her husband, and enjoying her grandchildren in Cliffside Park, New Jersey. She is the author of Language and Travel Guide to Sicily and Sicilian Feasts, published by Hippocrene Books.

I first discovered the beauty of the coastline of Sicily when I flew over it and saw the clear emerald waters against the craggy coast framed by the window of the airplane.Sicily is known as "La Perla Del Mediterraneo” or “The Pearl of the ” . With its beautiful blue-green waters and magnificent coast, it has developed some very enticing tourist attractions. Its golden-yellow sandy beaches are among the most beautiful in the world. The appreciation and

preservation of the coastline has led to a unique offering which is gaining popularity as a tourist destination in the form of Pescaturismo. Since its beginning, Fish Tourism has been very successful as a unique venture that gives visitors the opportunity to learn about fishing by going out to sea with experienced, local fishermen as guides.


In an effort to preserve the beauty of the land and the sea, the city of Trapani on the western coast of Sicily has been on the forefront of environmental conservation by setting up the Riserva Naturale dello Zingaro, a natural reserve that preserves not only the natural beauty of the coastline but also tries to keep the waters clear and unpolluted. To be close to nature in a clean and uncontaminated land and waters has certainly become a goal for many tourists who are looking for unique rewards in traveling to many of the unspoiled areas of . 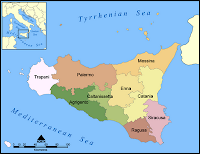 acting people with very specialized interests also giving them the possibility of engaging in water sports which have become very popular in this area. Divers enjoy the crystalline waters, swimmers and snorkels delight in the clarity of the blue and in the richness of the marine life it supports. Scuba diving, explorations of the coast, and underwater photography are also sought after activities which attract visitors and locals alike.

Guided tours are available for novices as well as for the experienced who wish to see, visit, and explore the splendid coves, mysterious grottos, the reefs teeming with a wealth of marine life and the breathtaking cliffs rising out of the blue waters to photograph, draw or just to enjoy while creating lasting memories.

Come si fanno le prenotazioni? How do you make reservations?

Quanto costa il biglietto? How much is the ticket?

Posted by Hippocrene Books at 11:12 AM 4 comments:

Has watching too many Olympic sports broadcasts made you quick to pick up the basics of the language? Now you can test your listening at an intermediate level with the tracks to the audio accompaniment for our Intermediate Chinese!

You can download tracks using your web browser or subscribe to the podcast on Apple iTunes. For more information, please refer to our previous posting on the release of the tracks to Beginner's Chinese.
Posted by Hippocrene Books at 9:49 AM 1 comment:

Today we feature a special method for mastering one of the most challenging parts of the Chinese language--the four tones--written by Nathan Dummitt, also author of Chinese Through Tone and Color, which was recently published by Hippocrene. Use this simple technique to help yourself sound like a native before you head off to Beijing!

-----
When beginning to study any foreign language, one of the most important things to remember is that you will almost certainly be required to master sounds that do not exist in English. The rolled 'r' of Spanish, the high 'u' of German and French, and the aspirated 't' of Hindi are all sounds that do not have corresponding equivalents in English. Mandarin Chinese is a language that contains many such sounds, and it is especially important to be careful when recognizing and producing these foreign sounds because Mandarin Chinese is a tonal language. This means that a single syllable, such as "bao", can have several different meanings depending on the tone in which it is pronounced. There are four tones in standard Mandarin Chinese.

The first tone is high and flat, with no change in pitch.

The second tone starts low and rises to the top of the vocal range.

The third tone starts high, but dips to the bottom of the vocal range, and then comes back to the top.

Many foreign learners of Chinese find that recognizing, producing, and especially remembering the correct tone for individual words is one of the most challenging parts of learning the language. While many introductory books seem to overlook this aspect of Chinese, correct tone usage is extremely important in order to be understood. Speaking Chinese without proper tone is akin to speaking English with only one vowel. While context and word order may occasionally allow you to make yourself understood, without a solid command of the four tones even a modest fluency with the language will continue to elude you.

In my book Chinese through Tone and Color, I have assigned a color to each of the four tones to assist the learner in accurately and consistently remembering the correct tone for over 100 of the most common words and characters. This mnemonic system has been successfully tested in high school classrooms and even non-visual learners have found that this basic association helps them remember to distinguish between the dozens of homophones in modern Mandarin. The book contains commentary and several example sentences for each major entry as also includes an mp3 CD with images attached to the files for portable learning.

Get a taste for what's in the book here.
Posted by Hippocrene Books at 9:20 AM 1 comment:

Many years back, Hippocrene began adding audio accompaniment CDs to our line of "Beginner's" books, so that students of these languages could hear and repeat the books dialogues along with native speakers.

Recently, we decided to digitize these accompaniment tracks and make them available online. The first audio accompaniment on the list, falling in line with this blog's focus on preparing travelers for the Beijing Olympics, is Beginner's Chinese, by Yong Ho. Give it a try! You can download tracks using your web browser or subscribe to the podcast on Apple iTunes.

The audio tracks, of course, weren't created to be stand-alone learning tools, and listeners trying to learn the language from scratch may be a bit baffled without a copy of Beginner's Chinese in hand. For those who know some Chinese, however, the dialogues certainly provide a good refresher course in the basics of Chinese conversation and can serve a good indicator (for those scratching their heads about whether they should buy Beginner's Chinese or our more advanced Intermediate Chinese) of just how advanced your Chinese level may be.

That's not to say that there isn't something here for the traveler, casual learner, or person simply curious to learn a few Chinese phrases, though! If you have trouble figuring out how to pronounce the Chinese phonetics in our last entry, on Zhujiajiao, try listening to the pinyin practice track while looking at the chart below--this will not only give you a sense of how to read and pronounce the Chinese Romanization system, but also provide an introduction to Mandarin's four tones.

If you have questions about the podcast tracks, or about pinyin or learning Chinese in general, feel free to leave comments and we'll find an expert in the language to respond!
Posted by Hippocrene Books at 8:14 AM 2 comments:

Our first China-related travel entry is from Michael, an editorial assistant in the office who lived in China for three years before joining Hippocrene: 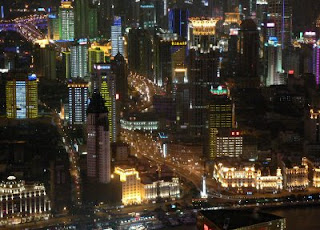 Shanghai likes to call itself China's "dragon head"--the sleek, modern face of an Asian nation that is rapidly becoming an economic and political juggernaut. Visitors to this bustling metropolis will find all the wonders of city where the favorite word is "development": the bright lights and eager consumerism of Nanjing Road, the clean waters and freshly-lain sod of Century Park, and slick steely monuments on view from the Bund.

When you need a break from the rat race of China's most populous city--and when I lived there, I often did--there are many retreats neary that not only move at a more relaxed pace, but offer a glimpse of the sedate culture that existed in central China before the construction of Shanghai at the turn of the 19th century. 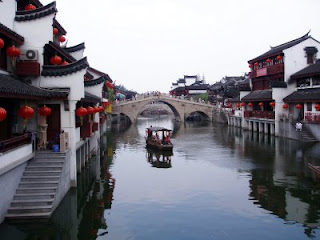 My favorite such spot is Zhujiajiao. Only a 90-minute bus ride away from the center of the city, it has all of the features that once dominated this part of the landscape, including gondola-dotted waterways, camel-back bridges, and Ming and Qing Dynasty architecture. It's surprisingly easy to stray from the main pathways selling tourist trinkets and find yourself on a serene residential alleyway, where locals still live and work in the area's ancient buildings. 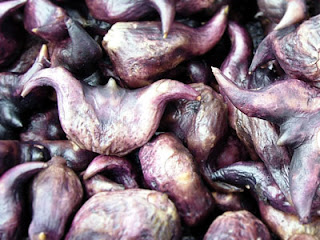 Unlike the notoriously brusque Shanghainese, moreover, the residents of Zhujiajiao are pleasantly laid back. On my first visit there I happened upon an elderly man making cicada cages in his house, who invited me to relax in the shade of his awning for a bit and politely nodded at my attempts at conversation starters in Chinese. In the end, I just sat quietly and watched him deftly weave the tiny cages out of bamboo while I munched on roasted caltrops--a local treat, much like a chestnut, that is a must-try for visitors.

While most of these little water towns around Shanghai are somewhat touristy (all of them lay claim, it seems, to the nickname "Venice of the East"), Zhujiajiao is unique in that it caters almost exclusively to local, Shanghainese tourists. This provides a double incentive to visit Zhujiajiao: not only do you get to see some of China's most beautiful bridges and waterways, but you get a rare glimpse of local Shanghainese people resting and relaxing with their families.

Here's some useful vocabulary, for getting to and around Zhujiajiao: 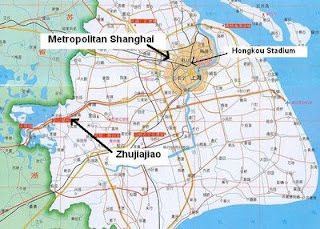 How much are the water caltrops? (Lit: How do you sell them?) - Língjiǎo zěnmemài? - 菱角怎么卖？

Images courtesy of Wikimedia Commons.
Posted by Hippocrene Books at 6:57 AM No comments:

For the launch of the Language & Travel blog, Hippocrene has a special treat: from now until the middle of August, we'll be focusing exclusively on Chinese language and destinations, presenting some of China's rarest gems while also giving a few insights into the language that will be useful for everybody, from first-time tourists to "old China-hands". 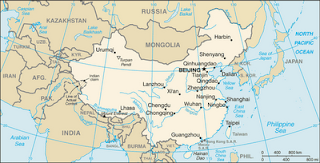 School kids in China think their country looks like a rooster.
Why the prolonged focus on China? Well, aside from Mandarin Chinese being the language with the most native speakers in the world (873 million - 1.1 billion speakers, depending on how you count), Beijing will also host the upcoming 2008 Summer Olympics and we know that a few key Mandarin phrases and tips about the country's most stunning tourist gems can really go a long way.

So, while you pack your bags for Beijing, stay tuned to this blog over the next two months to learn the things you'll want to know before you go.

How do you say "open sesame" in Chinese?
Posted by Hippocrene Books at 10:54 AM 1 comment:

After the success of our international cooking blog, Hippocrene Cooks, we've decided to launch another blog that draws off our considerable publishing resources--this one devoted to rare glimpses of the wide variety of hidden places and languages in the world.

So stay tuned and you'll find exclusive guest blogging from our many authors, as well as intriguing discussions of everything from hidden valleys in Albania to making introductions in Zulu!
Posted by Hippocrene Books at 7:06 AM 1 comment: