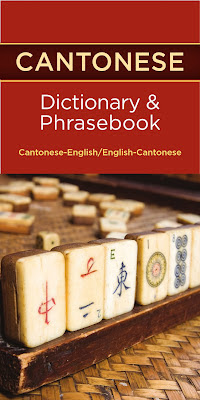 Although its total number of speakers (60 million) is merely a fraction of its behemoth sibling's, Mandarin (1025 million), Cantonese is still one of the world's most widely-spoken languages. It is an official language in Hong Kong and Macau, as well as a dominant dialect in the Guangdong province of China. It may not have the numbers that Mandarin claims, but Cantonese is nonetheless a major player in south China and among Chinese living abroad.

So where exactly does Cantonese pop up? Seemingly everywhere, if you're reading street signs, newspapers, or novels in Hong Kong. Maybe you're watching a Chinese film or listening to popular Chinese music. More often than not, these Chinese entertainment offerings will have also come out of Hong Kong, spreading spoken Cantonese to viewers and listeners across the globe.

Our new Cantonese Dictionary & Phrasebook serves as an indispensable reference for travelers, businesspeople, students, or anyone else interested in this notable language. Despite their similarities, Cantonese is not mutually intelligible with  Mandarin—it has a writing system all its own and uses characters not generally understood by non-Cantonese speakers.

So we've provided an easy-to-use guide that directs you through grammar and pronunciation. The phrasebook, along with the 4,000 dictionary entries, includes Cantonese characters and intuitive phonetics.

Get the most out of your trip with the newest Cantonese resource available! Pick it up at your local bookstore or purchase through our website, Amazon, or Barnes & Noble.
Posted by Hippocrene Books at 10:00 AM

More often than not, these Chinese entertainment offerings will have also come out of Hong Kong, spreading spoken Cantonese to viewers and listeners across the globe.Cantonese Translator

Hello! Thank you for your article. I’d like to try to compare it to my previous experience of learning English through Skype. I did around 10 conversations over Skype with a native speaker from http://preply.com/en/english-by-skype. And I was pretty satisfied with their Quality. I think they have a strong teaching quality, following their course curriculum now I can speak English like a native they also provide local tutors, but I Want to try another option.