October is Polish-American Heritage month! Polish Heritage Month was first founded back in 1981 in order to celebrate Polish history, culture and pride, and we’re excited to mark the celebrations this year with our wide selection of new and classic Polish interest titles. We’ve always had a strong Polish-interest publishing program here at Hippocrene, stemming from the background and history of our founder, George Blagowidow. Mr. Blagowidow is a native Pole who came to America after the war, and has always maintained strong ties with Polish language and culture – in fact, the very first cookbook in our catalog was The Polish Country Kitchen Cookbook! There’s sure to be something for everyone to enjoy with these books out this fall.

The Polish Country Kitchen Cookbook by beloved Polish-American author Sophie Hodorowicz Knab is now updated and available in paperback! Arranged according to the cycle of seasons, this popular cookbook includes more than 100 delicious, traditional recipes, and is peppered with pearls of practical wisdom as well as charming illustrations by Elliott Hutten.

Adam Zamoyski’s Poland: A History expands on his previous work The Polish Way, and traces Poland’s complex development from the Middle Ages to present day, examining the country’s political, economic, and military struggles, as well as its culture throughout the ages. The events of the last twenty years and the growth of the independent Polish state have allowed Zamoyski to look at Poland’s past with a fresh eye, bringing the major events and characters in its history to life.

Forgotten Holocaust, a classic of World War II literature by, has also been revised and updated. The third edition includes a new preface by author Richard C. Lukas, and foreword by Norman Davies, as well as a short history of ZEGOTA, the underground government organization working to save the Jews. It also features an annotated listing of the many Poles executed by the Germans for trying to shelter Jews during the War.

Lastly, we have Wanda Półtawska’s And I Am Afraid of My Dreams. In February 1941, Wanda was arrested by the Gestapo in Nazi-occupied Poland. She was nineteen years old. Charged with aiding and abetting the resistance movement, she was sent to the notorious Ravensbrück concentration camp. Her powerful memoir is an enduring testament to the courage of the human spirit.

These Polish Titles are also available: 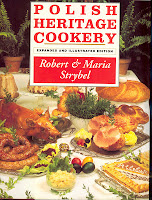 
All these titles are available in bookstores, as well as online through our website, Amazon.com and Barnes & Noble. We hope you celebrate your Polish heritage with others, and maybe with some bigos and a pierogi or two!
Posted by Hippocrene Books at 11:11 AM